FES Palestine Workshop: “Identity and Strength of a Party and how to Communicate it“

Christian Kröning, Executive Director of the SPD in Schleswig Holstein, and René Märtin from the German Empowerment Institute, visited FES Palestine at the end of August to implement the FES workshop “Identity and Strength of a Party and how to Communicate it“. The workshop, which took place between 24 and 26 August, specifically targeted youth members of a democratic Party and gave them the chance to reflect on the identity of the party as well as their own motivations for being involved in their party. The 22 participants learned how to communicate their position to the outside world and took advantage of the open space offered by the workshop to ask many questions and think about the principles and values of the party.

The workshop was an outstanding success and ended with a discussion focusing on the future of the party and Palestine in which the participants could express hopes and fears as well as their own future political engagement.

Consultancy for FES in Albania: My consultancy is part of FES’s ongoing programs supporting the democratic transition process in Albania. … END_OF_DOCUMENT_TOKEN_TO_BE_REPLACED 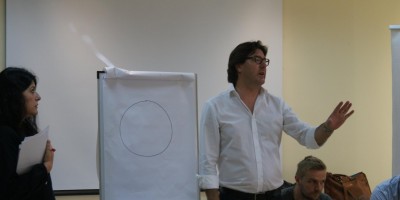 FES Palestine Workshop: “Party Organizing and Smart Communications“ René Märtin from the German Empowerment Institute and Frederik Digulla, from Kiel visited FES Palestine from 23 October to 1 November 2017 to implement the FES workshop “Party Organizing and Smart Communications“. The workshop, which took place between 23 and 25 … END_OF_DOCUMENT_TOKEN_TO_BE_REPLACED